An extensive and voluminous research on the Limassol Carnival during the past 120 years, by Stelios Georgiades. The book will be introduced by the Mayor of Limassol, Mr Andreas Christou, while Dr Angel Nicolaou Konnari, Associate Professor at the Department of History and Archaeology, University of Cyprus, will focus on the research. Free entrance (Attendees are welcome to join the presentation in carnival costumes and masks).
4 Friday 20:00 (80’)

An evening of serenades and carnival songs by the Children and Chamber Choir of Papadakion Municipal School of Music, the Music Workshop and the Piccolo of the Epilogi Choir, the Melodies & Chromata Children’s Choir and the Armonia Choir. Organisation: Limassol Municipality

The MET: Live in HD

“Desperate passion” is the phrase Puccini himself used to describe the opera that confirmed his position as the preeminent Italian opera composer of his day. Soprano Kristine Opolais and tenor Roberto Alagna join forces in the title roles of the country girl who transforms herself into a Parisian temptress and the dashing student who desperately woos her. Director Richard Eyre places the action in occupied France in a film noir setting. Met Principal Conductor Fabio Luisi leads the stirring score. With English subtitles.

A concert by Greek singer and songwriter Kostis Maraveyas, combining a variety of styles from different cultures. His familiar voice and upbeat mood are intertwined with the participation of the audience, in a sing-along party-style concert with songs from across the globe, performed in his own unique way and by the band’s excellent musicians.

In a New Orleans slum, Blanche moves in with her sister, in an attempt of reconciliation. Stanley Kowalski, her brother-in-law, will torment her past and crumble every single hope to rebuild her future. Through the conflict between Blanche and Stanley, Tennessee Williams clearly demonstrates that in today’s world, those who manage to survive are Stanleys, not Blanches. Pulitzer Prize for Drama in 1948

Music from the American Continent

14 new dance projects by established and upcoming choreographers are presented within the framework of the Cyprus Contemporary Dance Platform, organised by the Cultural Services of the Ministry of Education and Culture and the Rialto Theatre.

Photis Nicolaou | Those gentle hearts are like shot birds falling 20’

A black comedy about women trafficking, in which two Japanese impresarios hold auditions for young Russian women to work at their night clubs in Singapore. The auditions go horribly wrong when their ad fails to specify that the young women must be single.  Entrance is only permitted to guests over 15. With surtitles in English and Turkish.

Two for the Seesaw WILLIAM GIBSON

Α romance-drama set in New York with Jerry, a lawyer who has recently separated from his wife. At a party he meets Gittel, a struggling dancer. They instantly get along, and begin to fall in love. But the relationship is hampered by their differences in background and temperament.  Screening of the production by Moscow’s Sovremennik Theatre directed by Galina Volchek, with Chulpan Khamatova and Kirill Safonov. In Russian

The Cyprus Dance Association organises the 11th Cyprus Ballet Competition aiming to discover talented dancers and promote them across Cyprus and abroad. With the support of the Ministry of Education and Culture.

An irresistibly funny production of Shakespeare’s glorious comedy of love and change broadcasted from the National Theatre. Rosalie Craig’s spirited, glowing Rosalind lights up every scene.  With her father the Duke banished and in exile, Rosalind and her cousin Celia journey into the Forest of Arden.  There she disguises herself as a boy, embraces a different way of living and falls spectacularly in love.  With English subtitles.

Peter and the wolf / The magic remote control

The main characters f Prokovief’s musical story are Peter, a brave boy, a wolf, a chirping flute, a clarinet gliding playfully on the water, a slowly walking bassoon with a frown on its face and more.  After the musical story, the Orchestra holds a musical surprise for its young friends…Narrated by: Petros Yiorkadjis, Conductor: Alkis Baltas

Vassilis Michaelides’ poem, July 9th, is a milestone for the “Romiosyni” – or “Greekness” – of Cyprus, as well as for the nation itself. In the form of an oratorio composed by Michalis Christodoulides, it is performed by a 10-member orchestra and Diastasis Vocal Ensemble. Soloists: Giorgos Ntalaras, Kyros Patsalides and Costas Hadjichristodoulou.

An art exhibition by Constantinos Stephanou, with paintings inspired by old photographs of the Limassol Carnival. Opening of the exhibition: Tuesday, 1st of March at 19:00. The exhibition will open one hour before and until the end of every performance. 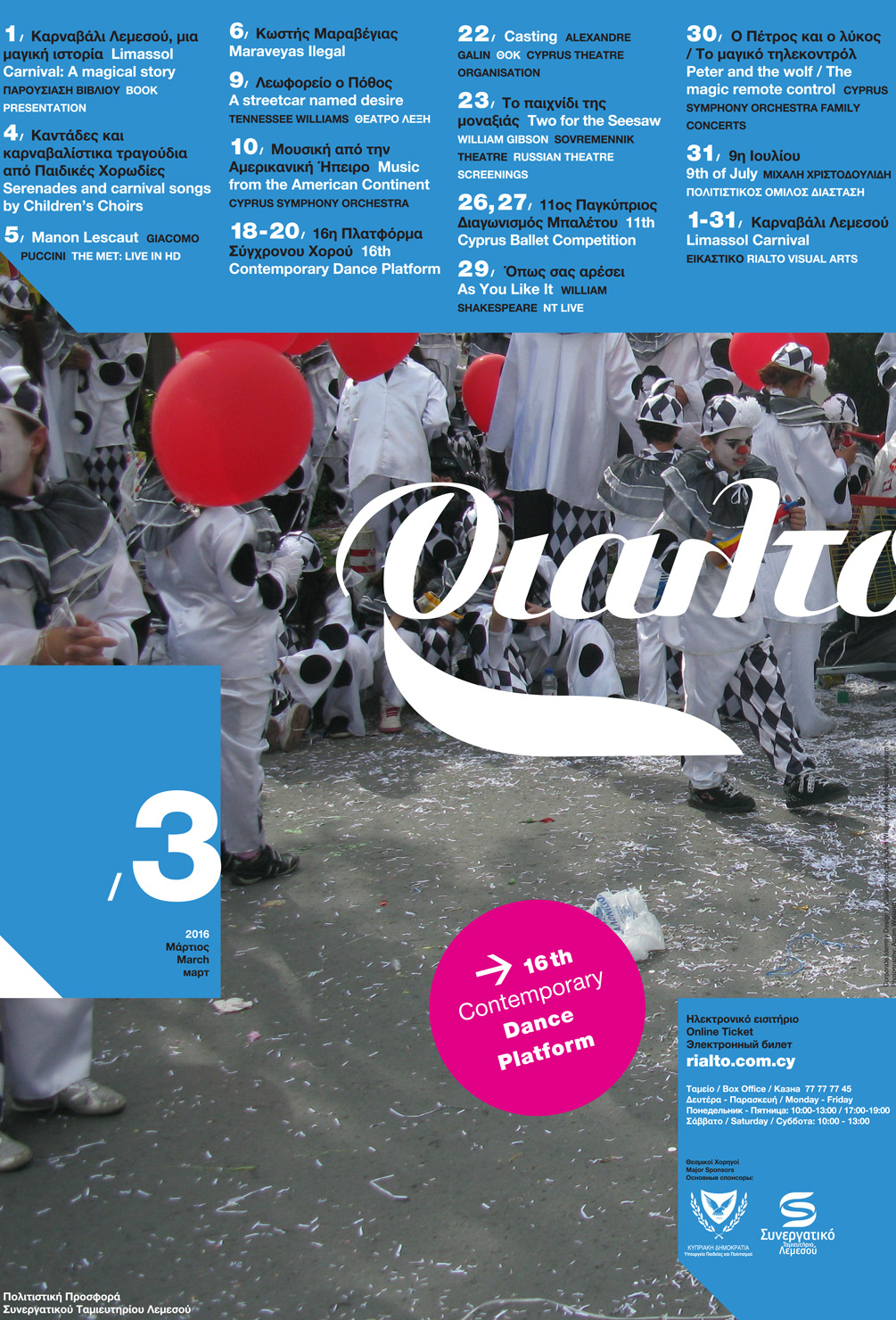 THE 14TH CYPRUS-RUSSIA GALA IS GOING ONLINE THIS YEAR AND WILL AGAIN SUPPORT RADIOMARATHON FOUNDATION.